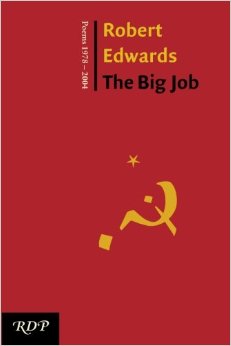 One hundred forty-seven years since Marx’s Communist Manifesto, 26 years after the fall of the Soviet Union, four years after Occupy Wall Street, Robert Edwards publishes a retrospective of his political poems. The title is The Big Job: Political Poems 1979-2003. Part retrospective, part invocation, part manifesto, at a time when the American poetry establishment and much of American poetry is governed by the strictures of an insular post- modernism, Edwards calls for a  “Big Job”.

Come one, come all, you laboring tribe

and get your seven heel boots on,

and cement finishers! Join the crew,

you wind-welders and stormy roughnecks laughing

open mouthed over roofs of the world!

Come on and get your feet muddy with common cause.

from a jug we pass mouth to mouth like a kiss.

This is the Big Job,

the high bridge to the future, never finished.

See the cities of the Americas,

of Africa and Asia of Europe and Down Under, mate –

my people built it all, every working color of us,

our labor, our genius, our patience with the stone.

No ordinary construction project, this is a big job with work for everyone, hard work, but honest work, not only to build bridges and schools, but the very foundations of a new society.  And it is big for another reason – it is governed by a big idea: that working people can take destiny into their own hands and shape the new society in their own interests, and not the capitalists’.

Women and men, we need your steel.

Your feet are the foundations,your arms the girders,

your talents the rivets and mortar. Bring everything you have,

we need it all because

it is ourselves we make –

Edwards’ poems express the blood truths of the class struggle. But at the same time the journey is never straightforward. Rather it is like reality itself, frequently marked by surprising images, twists and rhythms of a North American language, surrealist juxtapositions, and the interplay of contending forces.

This is a poetry deriving its power from an interdependence with the workers’ movement and simultaneously and continually drawing on the power of the imagination. This is a poetry that resonates powerfully both as poems, and as a contribution to the political struggle.

If The Big Job is based on the premise that workers have the power, skill and intelligence to rule society, it also presupposes that workers can create their own working class culture. Such a culture includes use of the most advanced artistic techniques developed under capitalism, but speaks through the voices of working people, reflecting our own experiences and struggles.

The poem “Inauguration Day, January 2001” (regarding the 2000 U.S. presidential election) concludes  with the line, “the coup was successful” (the “coup” being the ascension to power of  George Bush through a coordinated campaign of criminal vote tampering by the Republican Party, collusion by the big business media and a rubber stamp by the U.S. Supreme Court). What could have been another bulletin that the emperor has no clothes, instead accumulates power through the juxtaposition of surreal images leading up to a conclusion with the force of revelation.

of the wrecking class and the new CEO

of America, Inc., in a hostile takeover,

stepped to the podium and placed

the melting icecap of his hand upon

some dead paperweight box of words.

The spigot of his mouth opened

and a geyser of crude flowed

over the green earth.

In the poem “Inquest”, a poem that concludes with a rhetorical question is preceded by a tableau of images that takes on the power of a Diego Rivera mural.

Our statesmen, those politicians

fat with contempt for the People,

and holding a nuclear pistol pointed

at the world’s hostage head –

why do they keep digging foxholes

Can’t they see the angels descend

to take the injured workman’s place?

In the space of four stanzas, the poem moves swiftly from political statement to lyricism, from the humorous to the serious, from an image of descending angels and gods to an earthly language of blood, all anchored by the voice of one worker speaking to another.

Sometimes the “point” of Edwards’ poems is the river of images, as in the haunting poem of homelessness, “River of the Dispossessed”. “American Dark”, on the other hand is part love poem, part political missive, an almost perfect fusion of the personal and political.

And who could believe that writing based on the working class could be so exuberant and so much -well, fun– interspersed with such partisanship? Here is a stanza from “Dear America”.

how about if I give you an empty glass and promise

to fill it next fiscal year?

No, thanks, you say? You have to be going?

You have to make sure

that the production of silence is maintained

in the factories of the dead?

We have so much to talk about.

This voice – marked by rollicking word play and a deadly seriousness lying just beneath the surface – is repeated in other poems in The Big Job. The carnivalesque quality of Edward’s exuberant language may strike some as being in contradiction to the book’s flip side of plain speaking and sober truths. But when one remembers the historic role of carnival in overturning society’s established class order through festival and theater (even if just for the day), Edwards’ strategy becomes clear.

This book, which collects poems from 1970- 2003, reflects the political struggles in the U.S. during those years. There are poems here written in solidarity with the Central American and South African revolutionary movements. (Even here, the headlights of the South African miners are “like a third eye that opens far underground /in the infernal midnight galleries of exploitation”.)

There are poems like “Fourth of July”. In the summer of his class struggle, the young poet experiences a solidarity with other workers, and the world view of Marxism.  We will need these poems, given the struggles to come.

Edwards is particularly good at lambasting the extreme right wing figures of the Republican party of these years, and the big business forces who stand behind them. The poem “When Newt Gingrich Speaks” exposes the stench of fascism lying just underneath the glittering rhetoric of Gingrich and the late North Carolina Senator Jesse Helms (and our present day Trump).   Poems like “Progress, Holidays, And The Official Story” poignantly remind us that racism is alive and well in the supposed U.S. “post-racial” society, and the fight against it is an integral part of the struggle of our “Big Job”.

The destruction of the Soviet Union throws a big shadow in the course of this compendium, as well it should. Whatever one’s view of the Soviet Union, the loss of a counterweight to capitalism clearly emboldened U.S. imperialism in its trumpeted “new world  order”.

At a time when the capitalist class hailed the destruction of the Soviet Union as evidence of “the death of communism”, Edwards defiantly reaffirms his Marxist commitment (“The Death of Communism”). At the same time, reflecting the soul searching shared by many of us on the Left at the time, Edwards asks: “Shouldn’t there be an inquest?/ And isn’t it time to demand answers from our hands,/ to interrogate our tools?).

And if imperialism has been temporarily strengthened, it hasn’t changed its spots. In another poem Edwards uses his knowledge of Greek mythology to give it a different name: Erysichthon.

Because he would devour the world and be Death,

Erysichthon was cursed by Demeter with insatiable hunger.

Driven insane by appetite, he sold his daughter for food,

dragging all he could to his mouth,

until he broke his teeth on rocks,

until he tore the meat from his own bones

and dying drank his own blood down.

But it is the poems about America where I think Edwards poems especially sing. The poems in The Big Job are filled with American heroes: Pete Seeger, Gus Hall, Joe Hill, Woody Guthrie, Geronimo Pratt, Martin Luther King, Ma Joad and Grandma Millie.  (And a new one – Uberman !). I also think it is no accident that it is in these hard-won poems that his language, voice and meaning come together and most successfully fuse.

At a time where poetry is dominated by a “post modernist” aesthetic of essentially “art for art’s sake”, Edwards has created a significant body of work that bases itself on the working class, and which also possesses a rare power and resonance.

I hope this book enables Edwards to reach the broader audience he deserves. To those who ask where are the new Pete Seegers, I say: read this book. I hope it will be read and, what is more, used.

At a time when the capitalist crisis is deepening, this book calls on workers to imagine and to act.  At a time marked by the biggest looting of the wealth of the working class by the capitalist class in centuries, it is especially a call to a new generation to pick up the torch  and carry the struggle for the Big Job forward. In Edwards’ poems there is also a special emphasis on the role of poets in this daunting but important work.

This is a long road and heavy lifting awaits. But if this means continued struggle by the working class “rainbow tribe”, there is also joy and comradeship — and poetry and beauty and music — along the way.